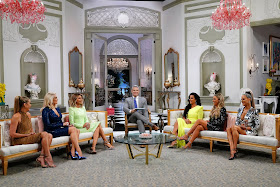 The Real Housewives of Beverly Hills season ninth reunion is finally coming to a television near you. For this year's reunion, Andy takes a look back at Denise Richards, Dorit Kemsley, Erika Girardi, Kyle Richards, Lisa Rinna, Lisa Vanderpump and Teddi Mellencamp Arroyave's most memorable moments.

Original cast member Camille Grammer will join the ladies on set to talk about her issues with the rest of the ladies. As you all know the biggest controversy is surrounding LVP's quitting the show and skipping the reunion, which will be addressed on the upcoming Bravo special. The three part reunion special kicks off on Tuesday, July 16 at 9pm/8c on Bravo. Watch the official RHOBH Season 9 reunion trailer below!

Reunion, Part 1: Tuesday, July 16 at 9pm ET/PT
The women gather to settle their grievances, but are faced with a stunning no-show from Lisa Vanderpump, which sets Kyle off. An emotional Denise reflects on her roller-coaster year, but her comments draw Camille’s ire. Erika and Lisa Rinna reveal some naughty secrets about their husbands, while Dorit calls out Teddi’s betrayal.

Reunion, Part 2: Tuesday, July 23 at 9pm ET/PT
Teddi finds herself in the hot seat as Andy holds her accountable for her role in Puppygate, which ultimately led to a rift between Dorit and Lisa Vanderpump. Dorit, Erika, and Kyle defend themselves when tabloid headlines are brought into question. Lisa Rinna opens up to the group about her possible issues with food. Unresolved emotions between Camille and the rest of the ladies come to a shocking climax.

Reunion, Part 3: Tuesday, July 30 at 9pm ET/PT
The reunion concludes with the fallout over Camille’s dramatic storm-off. Teddi and Denise face a volatile foe. A tearful Kyle reflects on the end of her long friendship with Lisa Vanderpump. Lisa Rinna, Dorit, and Erika debate Lisa Vanderpump’s behavior this season and question her motivations.