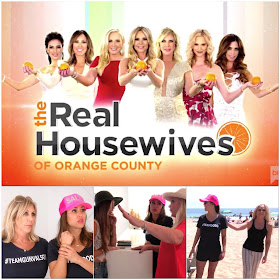 by: Sam Allan from Good Tea

Sorry this recap is late Tea Drinkers! On Monday night we got the latest episode of The Real Housewives of Orange County and it was so good!

We got to see Michael make Kelly's boobs into a cast so that they can compare the size of her boobs before and her after her surgery. Only in Orange County does this happen! I'm wondering, is Kelly Dodd's storyline this season fixing her private areas? First the vagina tightening now the boob job? I am here for it though! To celebrate Kelly's second boob job she invited most of the girls over for an epic afternoon of volleyball.

Before the party started I had to sit through two very painful doctors visits. Lydia went to the doctor to talk about "cutting Doug's balls off." Ugh. I am so over this reach for a storyline. Peggy also visited the doctor to get prepared for upcoming boob job. Wow, RHOC is really heavy on having surgery on their genitals this season. Tamra found out about the lies that people were spreading at Vicki's party. In other words a producer called a gossip website to spill the tea on what went down at the party so that the news would spread back to Tamra. Vicki was talking to her daughter Saint Briana and was trying her hardest to seperate herself from the Eddie rumours. I am SO over this Gay Eddie storyline.

Finally the scene was set for Kelly's volleyball party. All the girls were there, expect Meghan. Messy King Edmonds barely appeared in this episode and I loved it. In my opinion, I think that Kelly has the best house on the show! Forget Chateau Dubrow, it's all about Casa Dodd! All the ladies played volleyball on the beach and like usual, Vicki, Tamra and Shannon didn't speak. After the awkward game everyone went over to Kelly's house which was filled with desserts that look like boobs! I want to be invited to a Kelly Dodd boob party.

During the party Tamra was crying about Vicki's lies. Both women were literally in the same room and were talking about the drama to everyone, except each other. You can really tell that Shannon does not want Vicki and Tamra back together. Everyone knows that Tamra will eventually forgive Vicki in a few seasons time and when she does Shannon will be the odd one out. Finally, Vicki started screaming to Tamra that she hadn't done anything. Vicki, this was definitely not the way to approach a crying Tamra after not speaking for 10 months. The two girls agreed to have a ONE ON ONE downstairs, which quickly turned into 6 girls sitting in a room. Vicki made Kelly stay in the room while she yelled at Tamra for about 10 years of drama, BTW Vicki is still claiming she wasn't in a cancer scam.


>>CLICK HERE TO READ THE REST OF RHOC RECAP<<